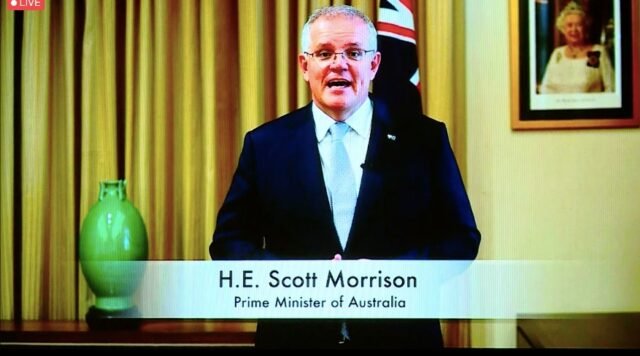 Prime Minister of Australia Scott Morrison on Wednesday said that his country is seeking to establish a new Consulate General in Bengaluru.

He also said that Australia will deepen its ties with India’s innovators, technologists and entrepreneurs, as well as the governments at all levels, and asserted that the ties that bind both nations are “indeed strong and abiding”.

“I’m pleased to let you know that Australia is also seeking to establish a new Consulate General in Bengaluru. Bengaluru is the world’s fastest growing technology hub – of course we want to be part of it. It is home to a third of India’s unicorn companies,” Morrison said.

In his video message to the Bengaluru Tech Summit (BTS)-2021, he said, Australia’s new mission in Bengaluru would expand its diplomatic presence in India to five posts.

Morrison also noted that as the BTS is on, his country is also kicking off the first-ever Sydney Dialogue in Australia, and he was honoured that India’s Prime Minister Narendra Modi will address the dialogue tomorrow.

I am pleased to announce we are establishing our Consulate-General in #Bengaluru. What better place than a city that has a third of the world’s #unicorns.
–@ScottMorrisonMP
Hon'ble PM of Australia#VenkaiahNaiduAtBTS2021 pic.twitter.com/uraYVLJKau

“This is a global summit on emerging, critical and cyber technologies – and I’m delighted to be announcing Australia’s first-ever Blueprint for Critical Technologies at that event. This signals Australia’s firm commitment to shaping the development and adoption of critical technologies internationally, including by working with trusted partners like India,” he said.

Noting that technology-leading nations will have greater economic, political and military power and considerable influence on global norms and values into the years ahead, the Australian Prime Minister said India is a major technology power.

“Technology is at the forefront of the Comprehensive Strategic Partnership which Prime Minister Modi and I signed last year. We’re already making great progress. We’re sharing expertise on cyber and critical technologies like quantum computing and AI. We’re working to make our supply chains more secure and resilient,” he said.

Indian and Australia are also collaborating on the mining and processing of critical minerals – like cobalt and lithium and rare earth elements – that are vital to clean energy technologies, and have military applications.

Morrison said both countries are also cooperating on space science, technology, and research, and Australia is proud to be supporting India’s inspirational ‘Gaganyaan’ human spaceflight mission.

Exciting day! PM @ScottMorrisonMP used his opening remarks at the #BTS2021 to announce that 🇦🇺 is seeking to establish a new Consulate-General in Bengaluru + Centre of Excellence for Critical and Emerging Technology in India. For details refer https://t.co/e0rKqpAIbL #Bengaluru pic.twitter.com/wsGljG8srE

“We’re deepening our education and research links also – vital to technological cooperation, and we’re working towards a low-emissions technology partnership, which will see us combine efforts on hydrogen and ultra-low-cost solar,” he said.

Highlighting that both countries are also working with the United States and Japan through the Quad Leaders Dialogue, the PM said, “This is about four like-minded democracies coming together, from our region, to show we can make a positive difference in addressing our region’s biggest challenges.”

“Together, we’re working to bolster supply chain security, advance the deployment of secure 5G and beyond-5G networks, to combat cyber threats, and secure our critical infrastructure, and much more. You know, and I know, that technology isn’t developed in a vacuum,” he added.

Suggesting that Australia is working with like-minded countries, liberal democracies in particular, to ensure global technology rules and norms reflect liberal democratic values, Morrison said, a new Australia-India Centre of Excellence for Critical and Emerging Technology Policy will contribute to that effort.

“The Centre will bring together Australian and Indian technologists, policy practitioners, academics, researchers and thought leaders. Helping our nations shape technology governance so it aligns with our values and supports an open, inclusive and resilient Indo-Pacific region,” he said, adding that it will also promote investment opportunities and innovation between Australia and India in technology, and amplify our policy influence globally.

Further, pointing out that Australia and India are diverse, multicultural, liberal democracies who seek a world that is prosperous, safe and secure, and where human dignity is best expressed through choice and freedom, the Prime Minister said, “We seek to lift up, not suppress. To build a better world, rather than to hold back change.”

“Our vision of the world understands the potential of technology to respond to the challenges of our time – and to lift all – to raise those living standards,” he said, “We have witnessed this so powerfully over the past 18 months, with medical breakthroughs now allowing us all to plan for a world after this pandemic.”

That same capacity to innovate will be at the fore of all of our efforts addressing climate change and in transitioning to a new energy economy, he added. PTI

Private sector participation essential for digital and technological transformation in the country: VP