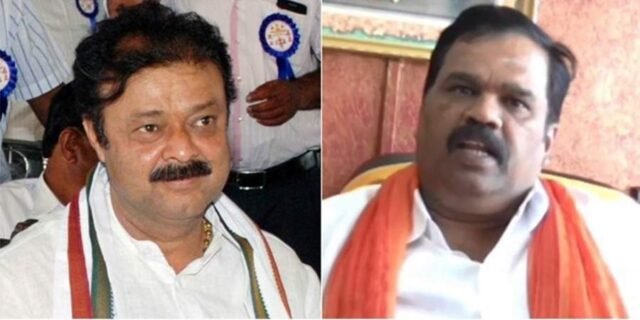 The assembly canteen witnessed a rare phenomenon on Monday — a spat that stopped just short of mutual assault between 2 BJP legislators.

Kadur MLA Belli Prakash and Horticulture Minister Narayan Gowda had a heated argument over a file pending with the minister around 12.30 pm on Monday, the first day of the legislature’s monsoon session.

As the quarrel escalated, the two men hurled chairs and yelled at each other, almost coming to fisticuffs. The intervention of JDS legislator Annadani, Minister CT Ravi and others brought the situation under control.

The cause of the fracas was a file from Prakash that was signed by the Chief Minister and forwarded to the minister. But as a lot of time had elapsed, Prakash enquired about its status with Narayan Gowda, who was sitting in the Vidhana Soudha canteen. When the minister said it would be signed ‘this week’, Prakash retorted, “It’s been four and a half months since you said ‘this week’ the last time.”

He went on to say, “Perhaps the ‘useless’ legislators in Karnataka should be us. In other states whatever MLAs ask, the work is done. But not in our state.”

Thinking his party legislator had called him ‘useless’, an upset Narayan Gowda said, “Come to my office and talk to me.” To which Prakash retorted, “Why should I come to your office? What kind of minister are you, not working in your own constituency?”

At this point, the duo hurled abuses at each other, including addressing each other in the Kannada ‘singular’. Fortunately, the ‘fire’ was doused by others present in the canteen.

BBMP officer is Covid-negative after retest