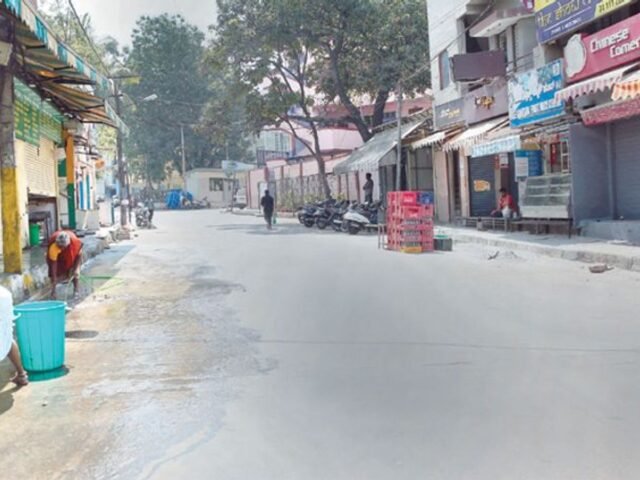 Minority appeasement politics is not the hallmark of the Congress, it would seem. Even an unabashedly ‘Hindutva’ party like the BJP resorts to it when it is politically expedient. Take the glaring case of Padarayanapura (Ward No. 135) – a densely Muslim populated locality — where three BJP leaders, including former BJP Mayor M Goutham Kumar, decided to name as many as 11 streets after Muslim ‘leaders’ and ‘social workers’ of the area. Interestingly, the ward gained notoriety earlier in 2020 when a minority mob targeted government health workers and policemen on Covid-testing duty.

Goutham Kumar and his party colleagues KV Munindra Kumar and Padmanabha Reddy are now under the lens of their own partymen after senior BJP leader and former cabinet colleague of Prime Minister Narendra Modi, Uttara Kannada Member of Parliament Anantkumar Hegde, filed an objection with the BBMP Commissioner. Hegde has demanded that the road-renaming exercise be stopped forthwith.

Hegde’s intervention comes after BBMP Joint Commissioner (Revenue) M Venkatachalapathy issued a notification on December 16, stating that BBMP had decided to name around 11 streets in Padarayanapura ward after several Muslim ‘leaders’ and ‘social workers’. Alongside, the notification had asked citizens to file objections to the move in 30 days before the BBMP Commissioner.

Hegde’s response to the notification makes him the first person to file his objection in the matter. Demanding that the decision be scrapped immediately, Hegde in his letter – a copy of which has been accessed by TheBengaluruLive — said it had come to his notice that BBMP had decided to name around 11 crossroads in Ward Number 135 (Padarayanapura) after several Muslim leaders who are said to be social workers.

Hegde’s letter went on to say, “Only the names of Muslim leaders have been recommended in this particular ward. It is not appropriate to undertake such a step in the name of social workers, which is nothing but promotion of one particular community. Such a decision taken by BBMP would also promote one particular community, which will create different scenes in other corporations and town panchayats where Hindus are in a majority, and the outcome of similar decisions cannot be imagined. Hence, it will be appropriate for BBMP to name such streets after freedom-fighters and national leaders who have fought for the country, which will also bring pride to Padarayanapura.”

Interestingly, documents accessed by TheBengaluruLive show that the ‘renaming’ decision was taken by the BJP when it was ruling in the BBMP Council in 2019-20, the last year of the Council’s 5-year term. Sources said the ‘renaming request’ was made by the then Padarayanapura corporator Imran Pasha, reputedly a ‘staunch’ Muslim leader of the locality.

Not a single BJP dissenter

At the BBMP Council meeting chaired by BJP Mayor M Goutham Kumar on September 8, 2020, a suo motu decision was taken to go ahead with the roads renaming. The decision was read out by the then ruling party Council leader and ‘staunch Hindu leader’ KV Munindra Kumar, and seconded by seniormost corporator Padmanabha Reddy.

The documents also show that the then Mayor had allowed voting on the issue and it was a unanimous decision by the ruling party members – with not a single dissenter in the BJP — to name the 11 Padarayanapura streets after Muslim ‘leaders’.