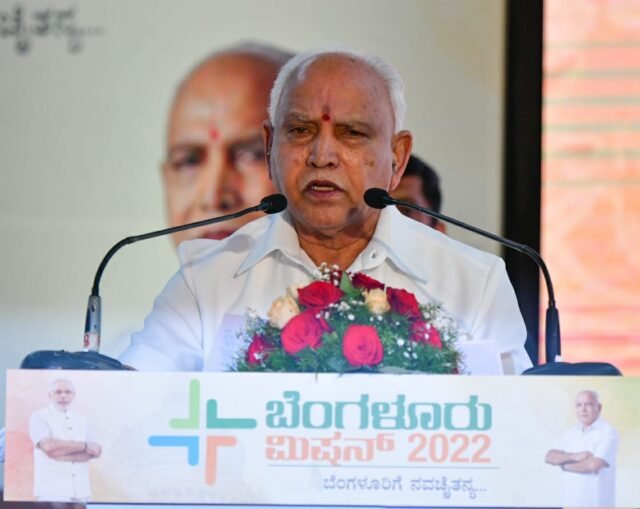 Aimed at providing world class amenities and infrastructure and making it the best place to live, Karnataka Chief Minister B S Yediyurappa on Thursday unveiled Bengaluru Mission 2022 to revamp the city in the next two years.

After studying the problems and challenges faced in everyday life in the city, the mission has been formulated identifying four core areas for development – enabling faster commute, Swachcha (clean), Hasiru (green) Bengaluru and connecting with citizens, he said.

“A blueprint has been prepared keeping in mind how Bengaluru should be in the 22nd year of the 21th century- which means 2022 that also marks the 75 years of India’s independence,” he said, speaking at the mission launch event.

The intention was to reach the goal in the next two years, the chief minister said. “This has been done aimed at addressing the challenges and problems faced by the city, after a thorough study and to give a clear vision for development. It has been done with an ambition to make Bengaluru as a world class city in all aspects,” he added.

The objectives of this mission included enabling faster commute by easing out traffic congestion, re-establishing the reputation of the Garden City under Green Bengaluru, ensuring efficient and scientific waste management and connecting with the people with unified digital platform and also by creating spaces to showcase culture, heritage and other specialties of the state capital. We will conduct inspections once in six months and make sure that all the works planned are completed within the given time-frame. Budget will be allocated for all the works planned,” Yediyurappa said.

Noting that there were around 84.5 lakh vehicles registered in the city, officials said it was planned to encourage public transport usage, speed up “Namma Metro” and suburban railway project along with construction and maintenance of good roads and smart traffic management to make commuting easier and faster.

Key initiatives for this include 12 high-density corridors, totalling 190 kms, to be taken up in mission-mode, installation of synchronous signal lights; promotion of shared electric vehicle mobility across the city, faster metro completion and expanding bus priority lanes, they said.

Bengaluru with a population of more than 1.2 crore was generating 5,800 tons of garbage every day, an official release said adding the waste management system will be made technology driven for efficient collection and monitoring the whole system. Also, community participation will be promoted and citizens will be encouraged to adopt zero waste home concepts, it said.

Under Green Bengaluru, it is planned that priority will be given to create clean waterways and lakes. As many as 25 lakes would be developed and bio-diversity in surroundings would be conserved. To enhance the green cover in the city, lands of some public sector units such as Mysore Lamps and NGEF would be developed into gardens. Also, two large tree parks would be set up and mini forests developed and popularised in Thurahalli, Kadugodi, JP Nagara and Mathikere, it said. Under the citizens connect plan, a unified digital platform will be created for providing citizen services, sharing information and also for addressing public grievances, the release added. PTI