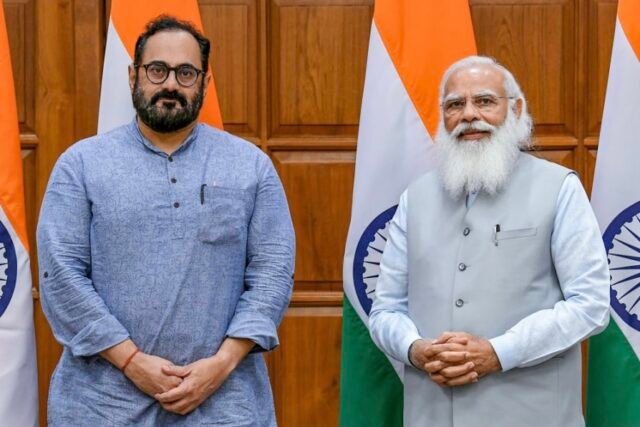 In a first online interview with digital media, Namma MoS says he is deeply invested in the aspirations of youth of Bengaluru and Karnataka

In his very first online interview with a media house after being inducted in the Union Council of Ministers as MoS (Electronics-IT and Skill Development), noted technocrat and long-time Bengalurean Rajeev Chandrasekhar makes it clear (in the context of the Twitter controversy) that all digital media platforms — Twitter included — will have to necessarily comply with Indian law. He is also bullish about his ministry’s role in upskilling the youth of the country. Not least, he stresses his commitment to serving the best interests of the youth of Bengaluru and Karnataka.

The following is the text of the Union Minister of State’s interview with TheBengaluruLive:

Q: As MoS for Electronics and IT, what will you bring to the table in terms of regulating social media platforms in India as per the requirements of Indian law? Can you enlighten our readers on the Centre’s plans to set up a regulatory panel to oversee the operations of digital media and social media platforms like Twitter?

Rajeev Chandrasekhar: All platforms — big or small — should always comply with Indian law and be respectful about the consumers and communities they serve.

Q: Even as India continues to battle Covid-19, the need of the hour is to regrow the Indian economy which has been badly hit by the pandemic. What are your plans as MoS in the Skill Development Ministry to contribute to putting the country’s economy back on the fast track?

RC: As our PM has said, the fight against this once-in-a-lifetime global pandemic is an “All of Government” fight — to protect lives and livelihoods. Everyone in the government is aligned and involved in this mission. My ministry too has its role cut out — from skilling and preparing tens of thousands of additional Covid warriors to transforming our skilling strategy and outcomes to deal with the post-Covid world and needs of the youth.

Q: Developing skills is not an easy task and cannot be achieved in a day or two. What programmes do you have in your mind for upskilling Indian youths? Kindly elaborate.

RC: Too early to elaborate. But our PM’s vision and expectation is that skilling will be a force multiplier along with the New Education Policy for the youth of India.

Q: As a successful technocrat yourself and now MoS for Electronics and IT, what are your plans to bring more overseas investments/companies into the country? Especially since you represent Karnataka in the Union Council of Ministers, could you elaborate on your plans to attract IT investments/entrepreneurs to the state?

RC: The PM launched ‘Digital India’ 6 years ago. ‘Digital India’ proved to be a significant backbone of resilience for India, Indians and our economy during the pandemic. India is growing into a world power in electronics manufacturing. Technology will be a critical driver of the global and Indian economy in the post-Covid world and India aspires to lead that charge.

Q: As a resident of Bengaluru for many years, Bengalureans will now look to you to represent the city’s interests in your ministerial capacity. What are your plans to expedite the completion of pending projects like Bengaluru Metro and Suburban Rail which would make a big difference to the city’s traffic infrastructure and commuters?

RC: Too early to elaborate. But I hope to progress on my long- standing dream, aspirations and reforms for our great capital city, our home Bengaluru and its citizens

Q: Bengaluru is widely seen as the ‘Silicon City’ of India. But the ground reality is that the digital infrastructure and delivery of citizen services of the state government and the civic agency (BBMP) continue to be below par. As an experienced technocrat, how would you address this issue so that citizens of Karnataka, including Bengalureans, get the world-class digital services they deserve?

RC: I will work hard with my colleagues in the party and govt to make Bengaluru a city that ALL Bengalureans can be happy and proud about. To serve Bengaluru was always the main purpose of my public life and will remain so.

Q: The absence of an umbrella organization to coordinate the work of agencies like BBMP, Bescom, BWSSB, BSNL and the police department has been a source of much inconvenience, misery and frustration for citizens of Bengaluru for decades. As a concerned and civic-minded Bengalurean, how do you plan to address this issue which several Karnataka governments have failed to resolve so far?

RC: Too early to discuss.

Q: Apart from your responsibilities and plans as MoS (Electronics & IT, and Skill Development), do you have plans in your personal capacity to invest in the upskilling of young Bengalureans and hand-holding of start-ups through setting up a trust/fund/organization?

RC: Yes, very much. To address the needs and aspirations of the youth of Bengaluru and Karnataka is high on my list of priorities.