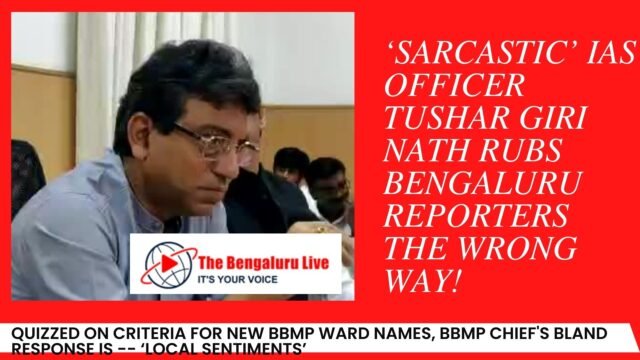 Recently inducted BBMP Chief Commissioner Tushar Giri Nath seems to have got off on the wrong foot with Bengaluru media persons. The latest buzz among reporters, based on his ‘style’ of fielding questions, is that the civic chief and press conferences don’t go well together! In fact, at a presser on Friday in connection with BBMP’s ward delimitation which was published on Thursday by the Urban Development Department, reporters went so far as to ask the 1994 batch IAS officer why he wanted to call press conferences if he resented queries put to him by media persons.

The unsavoury tete-a-tete between the civic chief and the press began when he gave a sarcastic reply to a query on the criteria used to name new Bengaluru wards, as in Veeramadakari (ward 37), Chanakya (39), Chhatrapati Shivaji (40), Ranadheera Kanteerava (43), Veera Sindhura Lakshmana (44), and some named after popular films. Giri Nath responded with: “The wards have been named according to the sentiments of the people as well as by asking local people living in the areas.”

When the reporters sought to know how the sentiments of the locals had been obtained, Giri Nath sarcastically replied, “Now we have invited objections from people and all are free to submit them. Please suggest new names for the wards along with other objections; we will consider all of them.”

When a reporter bluntly asked whether the names for the new wards were chosen so as to invite more public opposition and lead to a possible postponement of the BBMP elections, or whether the new names stemmed from the civic chief’s imagination, Giri Nath responded with: “If there are any objections, please submit them. Imagination is also part of creativity. It’s a creative exercise.”

At this point, Giri Nath appeared to lose his cool and said he would not say anything further on this particular question.

In response, the reporters present sought to know that if he would not take queries, why had he called a presser and not just issued a simple press note. “We cannot attend a press conference if we have to listen only to you without asking questions,” some of them said. Giri Nath again replied sarcastically, saying, “You can take the press release which will be issued.”

When another reporter pointed out that former Congress minister Ramalinga Reddy had alleged that BBMP has finalized the ward delimitation exercise without considering the sentiments of the people, Giri Nath said, “That is his (Ramalinga Reddy’s) view. I cannot respond to everyone’s views and their sentiments.”

According to sources, Friday’s was the third press conference by the new Chief Commissioner where he was apparently not serious in responding to reporters’ queries.