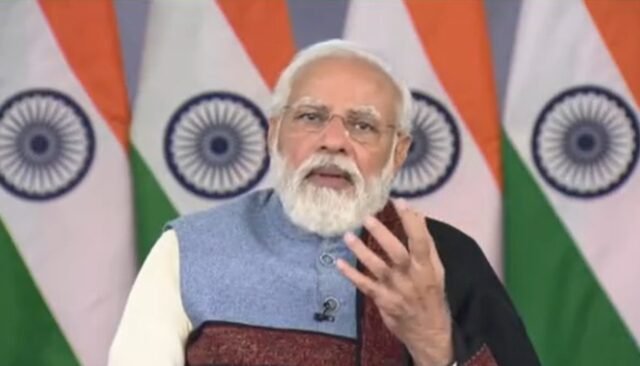 Prime Minister Narendra Modi on Thursday asked chief ministers to ensure minimum damage to the livelihood of common people and economic activities as they work to contain the coronavirus, while noting that its Omicron variant is infecting people many times faster than earlier variants.

“We have to be alert, be careful. But we also have to ensure that there is no panic situation. We have to see that in this festive season, the alertness of people and administration is not lowered anywhere,” he told chief ministers at a virtual meeting to review public health preparedness and the ongoing vaccination programme.

In his remarks at the meeting, the prime minister underlined the importance of vaccination and the need to further accelerate the ‘Har Ghar Dastak’ programme to achieve 100 per cent vaccination coverage.

Irrespective of the virus variant, vaccine remains the only proven way to tackle the pandemic, and made in India vaccines are proving their superiority all over the world, he said.

“In order to defeat coronavirus we need to keep our readiness ahead of every variant. Along with tackling Omicron, we need to start preparing for any future variant from now itself,” he said.

India has given the first dose of vaccines to about 92 per cent of its adult population while 70 per cent received both doses, he noted.

Speaking at meeting with the Chief Ministers. https://t.co/VDA7WeB7UA

It has also vaccinated nearly three crore adolescents within 10 days and this shows India’s potential and its preparedness to deal with this challenge, Modi said.

With any stringent lockdown affecting a large area likely to hit the economy hard, Modi asked chief ministers and heads of governments at various union territories to focus more on local containment and maintaining the momentum in the economy.

Some states have imposed fresh curbs to check the virus spread.

Modi stressed that states should be in a position to provide maximum treatment to infected population in home isolation.

For this, home isolation guidelines should keep on improving and be strictly followed, he added and noted that tele-medicine facilities will also help a great deal.

The Central Government is continuously keeping a track of the situation. We are also working with the states with a pre-emptive, pro-active and
collective approach.

All of us have to continue taking all possible precautions and remain as alert.

The way the central and state governments had adopted a pre-emptive, proactive and collective approach in previous waves, the same is the mantra of victory this time as well, the prime minister said.

“The more we can limit the corona infection, the less the problem will be,” he added.

“The sooner we give precautionary dose to frontline workers and senior citizens, the stronger our healthcare system will become,” he said.

Modi asserted that it is very important to safeguard the economy and the livelihood of common people while framing Covid containment strategies.

“There should be minimum damage to the livelihood of the common people, economic activities, and the momentum of the economy be maintained. It is very important to keep these things in mind while making any (containment) strategy,” Modi said.

“So it would be better to focus more on local containment,” he added.

Modi said 130 crore people of India will surely emerge victorious from the coronavirus pandemic with their collective efforts.

The doubts that were there earlier about Omicron are slowly getting cleared now, he noted.

The Omicron variant is infecting the general public many times faster than the earlier variants, he added.

Addressing the meeting, the prime minister noted that India’s battle with the pandemic of 100 years has now entered its third year. “Hard work is our only path and victory is our only option. We, 130 crore people of India, will surely emerge victorious against Corona with our efforts”, he said.

The sooner the precaution dose is given to the frontline workers and senior citizens, the more the capacity of our healthcare system will increase, he said, stressing the need to counter any misinformation about vaccines or the practice of wearing masks.

Modi lauded the states for using the Rs 23,000-crore package given to them to revamp the health infrastructure. Under this more than 800 paediatric units all over the country, 1.5 lakh new ICU and HDU beds, more than five thousand special ambulances, more than 950 liquid medical oxygen storage tank capacity have been added.

An official statement said chief ministers thanked Modi for his leadership during the successive waves of COVID-19, especially for his support and central funds for boosting health infrastructure in states.

Karnataka Chief Minister Basavaraj Bommai talked about the spread of cases in Bengaluru and measures taken to contain it, while his West Bengal counterpart Mamata Banerjee spoke of possible increase in cases in the state due to upcoming festivities and highlighted her administration’s preparation to tackle it.

Tamil Nadu CM M K Stalin said the state stands together with the Centre in the fight against the new wave, while Jharkhand CM Hemant Soren talked about misconceptions in some rural and tribal areas that have caused some difficulties in the vaccination programme.

Uttar Pradesh CM Yogi Adityanath talked about steps being taken to ensure that no one is left out of the vaccination drive, while Punjab CM Charanjit Singh Channi thanked Modi for fund and infrastructure support, especially in meeting oxygen requirements, the statement said.

Solutions to all problems hidden in Vedas, Upanishads: Amit Shah

‘Bengaluru could become another Covid-ravaged Mumbai’