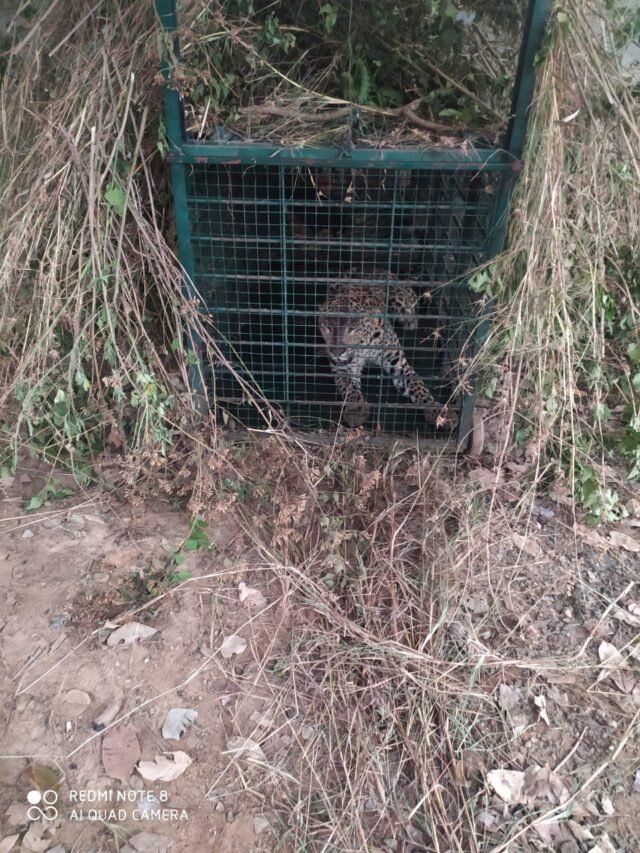 After spending an anxious week, the residents of Prestige Song of the South, an upscale apartment in Begur, breathed a sigh of relief on Monday after the forest officials captured a leopard which was prowling inside the residential complex for over a week.

A range forest officer from the K.R. Puram division (Bengaluru Urban) was put in charge of the operation of rescuing the leopard after the forest department officials saw CCTV footage which showed the big cat visiting the apartment complex from the nearby Bannerghatta forest.

The leopard was first sighted in a CCTV footage on January 23, following which the forest officials and the police launched an operation to capture it.

Apart from launching a combing operation, the officials also used drones with cameras to follow the leopard’s movement after it was spotted twice near the apartment complex. It was believed that the leopard had moved towards the Hulimavu lake.

The pressure to capture the leopard increased after the third sighting. The residential complex is surrounded by around 50 acres of vacant land with a lot of bushes and a rock hill, an ideal setting for leopards to hide.

Luckily, no report has been received of the big cat causing harm to the people.

In their attempt to capture the leopard, forest officials had set up a cage near the apartment complex off Koppa-Begur Road on January 24, but the big cat didn’t fall for the trap.

“Later, the forest department decided to set up three more cages in the 50-acre space overgrown with bushes and shrubs. We finally saw the leopard trapped on Monday morning,” an official said.

The leopard has been taken to a rescue centre in Bannerghatta and is expected to be released in a forest after the necessary check-ups.

“Our officers managed to trap the leopard successfully without harming the animal or any human. It was a simple operation, where being patient paid off,” Deputy Conservator of Forest, S.S. Ravishankar, told reporters.

The officials said that they would see if other leopards are also visiting the area.

After the initial sightings, the residents of the apartment complex were told not to venture out early in the morning or late in the evening.

According to wildlife experts, leopards generally adjust easily to their new environment as unlike other big cats, leopards can live in different types of habitats.

With vanishing habitat and prey, they usually come at night to look for stray dogs, and generally don’t attack humans, an official said.

This is not the first time that a leopard entered the human habitat in Bengaluru. In January 2019, a leopard was spotted on the ITC campus in Yelahanka. It was captured late at night before being relocated to the Bannerghatta National Park the next day.

On February 7, 2016, a leopard strayed into the premises of Vibgyor School at Whitefield. During the capture operation, wildlife scientist Sanjay Gubbi was attacked by the panicky animal. Some others also suffered minor injuries.

After Madhya Pradesh, Karnataka has the highest leopard population, according to a recently released report by the Union Ministry of Environment, Forests and Climate Change.