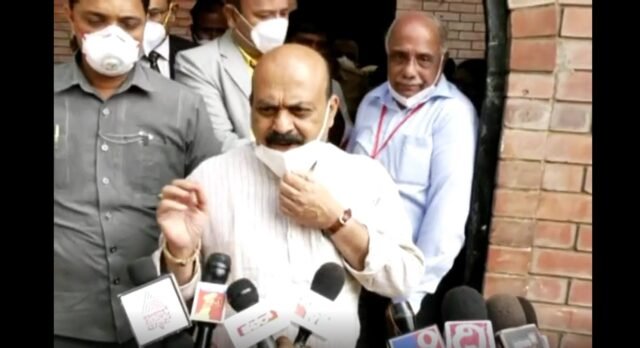 Amid fresh concerns of COVID-19, Karnataka Chief Minister Basavaraj Bommai on Wednesday said the state government intends to administer booster doses of vaccine to health and front line workers and he will discuss it with the Union Health Minister Mansukh Mandaviya.

He said no decisions have been taken regarding restrictions on Christmas and New Year celebrations, and there is no need for “unnecessary worry” on lockdown like measures, when social and economic activities are slowly picking up.

“I’m going to Delhi on December 2 during which I will be meeting the Union Health Minister, I will discuss with him administration of booster dose to health and front line workers who had taken first and subsequently the second dose of vaccine about six to seven months back,” Bommai said.

Speaking to reporters, he said he will get to know from the Union Minister the scientific developments on administering the booster dose and the Centre’s take or recommendation in this connection.

“We have already discussed with experts in the COVID task force administration of booster or third dose to health and front line workers, and the opinion is that- it should be administered especially to health workers, so I will discuss it,” he added.

There have been fresh concerns over COVID, following the new clusters emerging in the state and threats of new variant ‘Omicron’ looming large.

Ruling out making vaccination compulsory or attaching any government facilities or schemes with it, the Chief Minister said, “rather than making it compulsory, we will intensify the campaign regarding vaccination.”

He said strict vigil is being maintained along the borders, especially with Kerala, aimed at controlling further spread of the virus from there.

Noting that about 2,500 foreign travelers arrive in the state through Bengaluru and Mangaluru airports every day, he said all those coming in, will be tested on arrival and will have to undergo seven days home quarantine despite testing negative, aimed at controlling the spread of virus.

On a sample of one of the two persons who arrived in Bengaluru recently from South Africa, which is said to be different from the existing Delta variant, he said, ” it has been sent to National Centre for Biological Sciences (NCBS) for further analysis, remaining passengers have tested for Delta variant.” PTI

Milestone in automobile transportation to Nepal