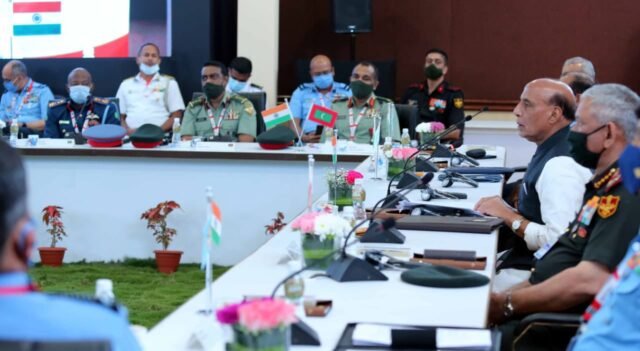 Defence Minister Rajnath Singh on Wednesday said India can take on the role of being the net security provider in the Indian Ocean Region as geopolitically it is a reliable partner in the IOR.

“We live in a challenging geo-political landscape where countries not only have to face the threat of military aggression, but natural calamities which include pandemics like COVID-19 which has wreaked havoc in the last one year,” Singh said.

Therefore, when faced with threats across multiple dimensions, it is imperative for the nation to strengthen relations with countries with whom it shared converging views on key global issues, he said,addressing the inaugural session of Chiefs of the Air Staff Conclave at Aero India here.

“Geopolitically India is a reliable partner in the Indian Ocean Region and can take on the role of being the net security provider in the region,” he added. Noting that air power has and would continue to play a critical role in maintaining regional stability and peace in the region, Singh said freedom of manoeuvre provided by air and space capabilities enables the nation to influence in a sustainable and clearly escalable manner.

The Indian Air force is at the very forefront of offensive capabilities with its reach, speed and precision, he said. Indias unique disposition in the IOR, complimented by a potent airlift capability of IAF, enables it to contribute significantly in Humanitarian Aid and Disaster Relief (HADR) missions, he said.

Singh noted that India has been regularly conducting exercises to deepen HADR cooperation and coordination among its neighbours with a focus on sharing expertise and assisting building capabilities.

He also said that the recent conflicts had shown the potency of emerging technologies and India is heavily focused on building these capabilities. “We are keen to cooperate with our defence partners in these niche technologies with focus on knowledge sharing and co-production,” he added.

The Chiefs of the Air Staff Conclave today had physical representation from 26 countries, while 14 were in attendance virtually, officials said. The Conclave has been planned with three sessions to address the themes of disruptive technologies and innovations, air power in Indo-Pacific region and air power and airspace strategies, they said.

Attended the Chiefs of Air Staff Conclave at @AeroIndiashow. The CAS Conclave brings together senior dignitaries from Air Forces around the world. It is but befitting to have such a conclave as part of Aero India which is primarily focused on Air Power & associated technologies. pic.twitter.com/OZd3syEUxy

Air Chief Marshal Rakesh Kumar Singh Bhadauria, in his keynote address, said “we have witnessed a paradigm change in the Geo-political landscape in recent years and globally, we are facing unprecedented levels of uncertainty, volatility and interconnected threats.” While the world was grappling with complications and control of the pandemic, the worsening inter-state relations, rising mistrust and geopolitical tensions have only reinforced the importance of mature and balanced cooperation at international level, he said.

“We need to strengthen our mutual understanding and existing security frameworks based on the principles of Cooperation, Collaboration and Coexistence,” he said, adding that for India, the security challenges are as varied as its geography and as unpredictable as the nation”s threats. Noting that the nature of warfare has changed significantly in the last few years, the air chief said advent of new technologies and cross linking of ”Physical”, ”Digital” and ”Cognitive” domains has complicated the art of war fighting considerably.

“Our understanding of national boundaries has shifted well beyond the classical definitions of airspaces, land borders and shorelines. An attack may originate without warning, several time zones away, and its effect may proliferate rapidly across several domains.”

Also, the exponential technological progress made in the last few years has made the realm of sub-con warfare more complex, Bhadauria said. The low cost and easy availability of simple disruptive technology like drones with small state and non-state actors have made them more lethal, agile and capable of generating disproportionate effects, he said.

“We are closely observing these developments and are focusing on developing capabilities in unmanned, and optionally manned platforms, manned-unmanned teaming, and anti-drone technologies,” he added. PTI

I have not called or visited Ragini since 2013: Yogi