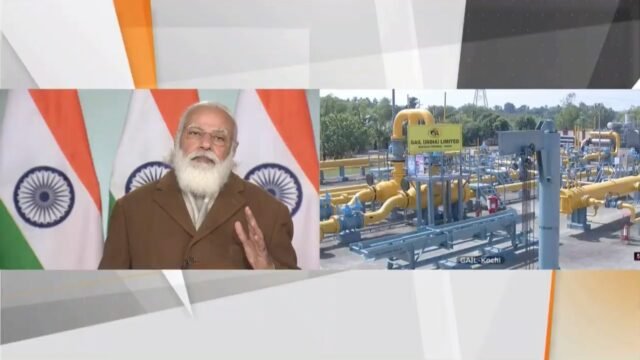 Prime Minister Narendra Modi on Tuesday said that a gas-based economy is crucial for Atmanirbhar Bharat and work is being done in the direction of “One Nation, One Gas Grid”.

Prime Minister Narendra Modi on Tuesday said that a gas-based economy is crucial for Atmanirbhar Bharat and work is being done in the direction of “One Nation, One Gas Grid”.

“It is an honour to dedicate the 450-km pipeline to the nation. This is an important day for India, especially for people of Karnataka and Kerala. India is focusing on gas-based economy and lot of work is being done on ‘One Nation, One Gas Grid’. The gas-based economy is also crucial for Atmanirbhar Bharat,” said PM Modi at the inauguration.

“It is an important day for India, especially for the people of Karnataka and Kerala. These two states are being connected via a natural gas pipeline. I congratulate everyone as the pipeline is a futuristic step towards a clean energy ecosystem,” he added.

Governors and Chief Ministers of Karnataka and Kerala, along with Union Minister for Petroleum and Natural Gas were also present during the event.

Kochi-Mangaluru Natural Gas Pipeline will have a positive impact on economic growth, the Prime Minister stated.

“It is an example that if we work together, nothing is impossible,” he added.

“The Kochi-Mangaluru pipeline is an example that if everyone works together by prioritising development, no goal is unachievable. This pipeline is going to prove very important in accelerating the development of both the states,” said PM Modi.

“It is not just a pipeline but it will be a major driver of development in both states,” he added.

The Kochi-Mangaluru pipeline will increase the ease of living for millions of people in both states. This pipeline will reduce the expenses of the poor, middle class and entrepreneurs of both the states, the Prime Minister stated.

“The Kochi-Mangaluru pipeline will be the medium of gas distribution system in cities. It will become a medium for developing CNG-based transport systems in many cities,” he added.

According to the PMO, the 450 km long pipeline has been built by GAIL (India) Ltd. It has a transportation capacity of 12 Million Metric Standard Cubic Metres per day and will carry natural gas from the Liquefied Natural Gas (LNG) Regasification Terminal at Kochi (Kerala) to Mangaluru (Dakshina Kannada district, Karnataka), while passing through Ernakulam, Thrissur, Palakkad, Malappuram, Kozhikode, Kannur and Kasaragod districts.

The total cost of the project was about Rs 3,000 crore and its construction created over 12 lakh man-days of employment. Laying of the pipeline was an engineering challenge as the route of the pipeline necessitated it to cross water bodies at more than 100 locations. This was done through a special technique called the Horizontal Directional Drilling method.

The pipeline will supply environment-friendly and affordable fuel in the form of Piped Natural Gas (PNG) to households and Compressed Natural Gas (CNG) to the transportation sector.

It will also supply Natural Gas to commercial and industrial units across the districts along the pipeline. Consumption of cleaner fuel will help in improving air quality by curbing air pollution. (ANI)