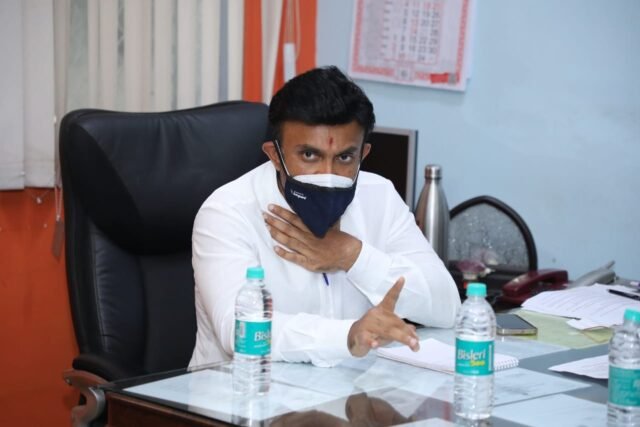 Amid fresh COVID-19 concerns in different parts of the country and apprehensions of a possible fourth wave of the pandemic, the Karnataka government on Monday issued guidelines making wearing of face-masks and maintaining social distancing compulsory.

The decision was taken at a meeting headed by Chief Minister Basavaraj Bommai with senior ministers, officials and the COVID-19 technical advisory committee (TAC) consisting of experts here, to review the situation in the State amid concerns over a possible fourth wave.

”Masks should be worn compulsorily, especially at places where there is a crowd and in indoor places, social distancing has to be maintained. Guidelines will be issued today to this effect. We have not taken any decision regarding imposing any penalty immediately,” Health Minister K Sudhakar said.

Speaking to reporters after taking part in the meeting, the Minister said the number of positive cases has slightly increased in Bengaluru, where the positivity rate is 1.9 per cent, and the situation would be monitored and supervised with guidelines about the treatment if required.

”On April 27, the Prime Minister will be holding a video conference with Chief Ministers and Health Ministers of all States, where more guidance and information may be shared. After that, we will hold another round of meeting here and further measures, if required, will be taken,” he added.

The COVID-19 restrictions were lifted in the State from February 28 in view of the daily low incidence of cases.

The government order issued later in the day said, ”The wearing of a face covering or mask by the public is compulsory in all public places, in workplaces and during transport. Similarly, spitting in public places will be punishable with fine, as may be prescribed in accordance with its laws, rules or regulations by the local authorities.”

Further, individuals must maintain social distancing – a minimum distance of two feet – in public places, the order signed by Chief Secretary P Ravi Kumar said. Currently, there is a surge in cases in Delhi, Haryana, and Tamil Nadu, and slight increase in daily cases in Karnataka, it said. Therefore, as a pro-active step to minimise the number of cases, this order is being issued as per the recommendations of TAC, though other States have re-introduced the mask mandate with penalty for non-compliance Referring to the World Health Organisation that said health issues like hospitalisation and ICU care are required more for the unvaccinated people, the Minister pointed out that the number of people who have taken the preventive dose (third dose) is low, and that more people have to take the booster.

”People above 60 are being given preventive or third dose for free. Don’t wait for the next wave, take the preventive dose and protect yourselves,” he said.

Noting that countries like South Korea, Thailand and Japan have been reporting a spike in cases, Sudhakar said the passengers travelling directly to Karnataka from these countries would be specially monitored at the airports and their details and contact numbers collected, and they would be telemonitored at home.

In response to a question, the Minister said Omicron BA.2 sub-lineages are emerging, but until an official report comes from the INSACOG lab, it would be difficult to say which variant is prevalent.

”It (lab) has collected samples for genomic sequencing and we may get a report in two or three days,” he said, adding that if the samples are Omicron sub-lineages, symptoms would be more or less the same.

Stating that about 10,000 tests are being conducted on an average per day, Sudhakar said the Centre’s guidelines about testing those symptomatic is being followed by the State.

Regarding severity of the infections, he said the State government has obtained information regarding the situation in other places like Delhi where there are no major issues and the rate of hospitalisation or those requiring ICU care is low, whereas in foreign countries hospitalisation at few places is more and it may be because of low rate of vaccination there.

Replying to a query, Sudhakar said the guidelines on masks and maintaining social distance are applicable to all whether it is the common man or any political party, and they need to be followed in the interest of public health at large.

Karnataka recorded 60 fresh cases and zero fatalities on Sunday, taking the total infections to 39,46,934 and the death toll to 40,057 so far. PTI

Maintain vigil over Delta plus variant of virus: Karnataka CM to officials