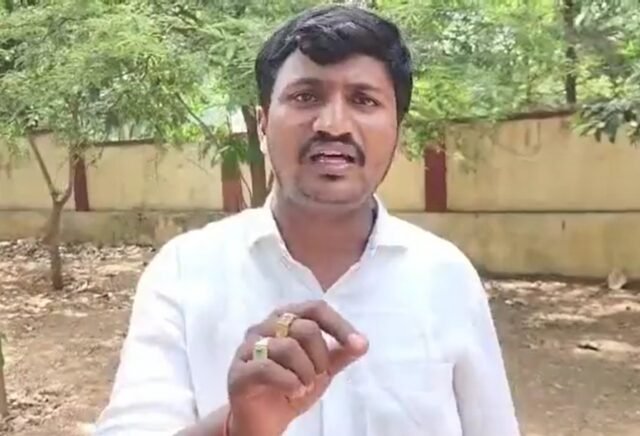 A civil contractor, who had written to Prime Minister Narendra Modi against the government officials demanding 40 percent commission in public works, has been booked by the Gangavathi rural police for alleged criminal breach of trust.

Based on a complaint from the executive officer of Karatgi Taluk Panchayat D Mohan, the police registered a case under section 406 of the IPC against Yerriswami Kuntoji on May 6. This came to light only recently.

In the complaint, Mohan said the alleged irregularities took place from April 17, 2021, to June 17, 2021. Yerriswami’s Vijayalakshmi Enterprises was assigned to supply material for the solid waste disposal unit in Mustur village under the Mahatma Gandhi National Rural Employment Guarantee Scheme.

The technical assistant of village Vishnu Kumar Naik was supposed to supervise the quality of work, Mohan said in his complaint.

However, sometime in between, Yerriswami allegedly made some payments to Naik through the phone which, according to Mohan, was a criminal breach of trust.

#BREAKING #FIR regd by gangavathi rural police against #contractor Yerriswamy who wrote letter to @PMOIndia complaining that #Commission is being demanded by govt officials to release his amount. Cops inform based on complaint 4m CEO- FIR regd under IPC 406. Investigation is on pic.twitter.com/ev5flAC3TD

According to him, he had supplied materials worth Rs 15 lakh and he had received Rs 4.8 lakh to date while the rest had not been paid.

The contractor said he had supplied some material and received some amount online but not the remaining sum.

“The previous elected body of village Panchayat had assigned me the work. After the newly elected body took over, officials put forth the demand for a 40 percent cut,” he said.

Yerriswami said he had made it clear that he would get the work done neatly and he would not pay any amount.

“Initially, everyone agreed, but later their attitude changed and put forth the demand. They even threatened me with dire consequences. When I did not receive the payment, I wrote to Narendra Modi,” the contractor said.

After the FIR was registered, he said he had written to Chief Minister Basavaraj Bommai, the then Rural Development and Panchayat Raj Minister K S Eshwarappa and regional commissioner at Kalaburagi, yet he was booked under section 406 of the IPC.

On April 12, a civil contractor from Belagavi district – Santosh K Patil – allegedly died by suicide in a hotel in Udupi, accusing Eshwarappa of demanding 40 percent commission on civil work in his village last year.

Following the incident, Eshwarappa resigned from his post saying that he would come clean after the investigation.

The issue gave the opposition Congress and the JD(S) ammunition to attack the ruling Bharatiya Janata Party in Karnataka about corruption. PTI

Night curfew in the interest of public health: Karnataka CM

Ready to roll out vaccine within 10 days from approval date: Health Ministry