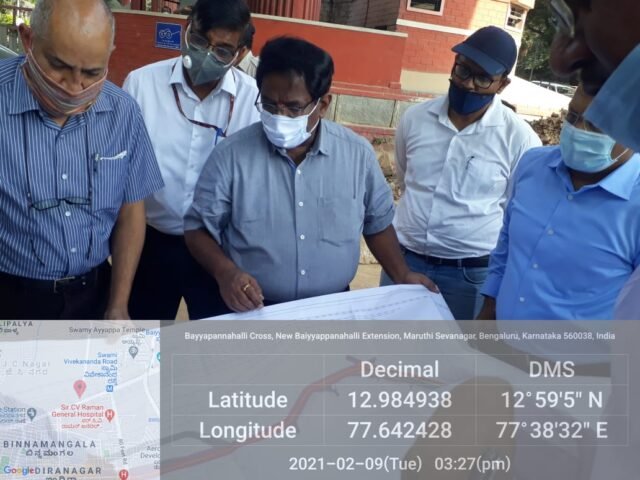 As the saying goes, a new broom sweeps clean, and new Karnataka Chief Secretary P Ravi Kumar was a good example of that enthusiastic spirit when he spent more than two hours in the field on Tuesday studying the plan adopted by the Bruhat Bengaluru Mahanagara Palike (BBMP) to decongest the Byappanahalli junction.

The Chief Secretary was accompanied on his recce by BBMP chief N Manjunatha Prasad, who briefed the top state bureaucrat about the project. The second senior most IAS officer in the state government, Additional Chief Secretary (Development) Vandita Sharma, Metro MD Ajay Seth and BBMP Administrator Gaurav Gupta were part of the inspection group.

Prasad pointed out that over the years there had been a huge growth in the Eastern part of Bengaluru, as a result of which the state government had requested the Railway Department to convert the goods terminal at Byappanahalli into a passenger terminal. Work on the passenger terminal is nearing completion and the expected footfall would be over 1 lakh passengers per day. On their part, the Railways have requested the state government/BBMP to develop the connecting road from Banaswadi Main Road to Old Madras Road leading to the new Sir M Visvesvaraya Terminal.

BBMP envisages an ‘Iconic Rotary Concept’ for construction of the ROB at the IOC junction, which will entail minimal acquisition of private properties and an additional 2 lanes to the ROB without any additional land acquisition from the Defence authorities.

Technical features of the additional 2 lanes to the 2-lane ROB: