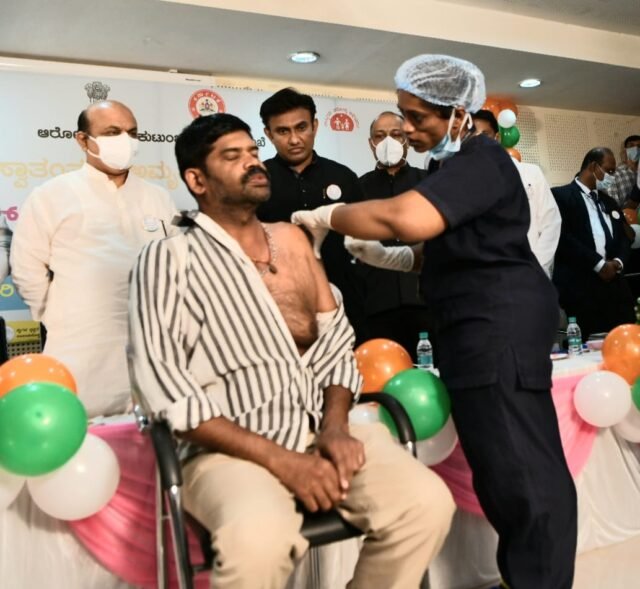 Karnataka Chief Minister Basavaraj Bommai on Saturday said the booster dose drive was important in the fight against COVID-19 as the residual effect of the pandemic will have a ‘tapering effect’.

The booster dose drive called ‘Ghar Ghar Dastak’ (Knock at every door) for the next 75 days starting from Saturday has been planned by the Centre to commemorate the 75 years of India’s independence, he said. ”The residual effect of the COVID-19 will not go immediately. It will have a tapering effect. Hence, we have to take all precautions,” Bommai said while launching the booster dose campaign for the next 75 days for people above 18 years.

If the country takes the right steps at the right time, the pandemic can be brought under control, the Chief Minister said, adding that the World Health Organisation and the Government of India have insisted upon it.

“Prime Minister Narendra Modi has led the nation from the front in the fight against the pandemic and started the drive. On behalf of Karnataka, I express my gratitude to him,” Bommai said.

The Chief Minister pointed out that the Centre has saved the state from a major financial burden by giving the vaccine free of cost.

He appealed to doctors and health workers to make sure that in the next 75 days no family should be left behind in getting the booster dose.

”We have to vaccinate people in a mission mode to achieve the target,” Bommai told the doctors and paramedics present on the occasion.

He also appreciated the medical fraternity and health workers for their role in achieving 100 per cent coverage of first and second dose of COVID-19 vaccines to the eligible population of Karnataka.

‘Commander’ for each containment zone

Centre mulls to establish AIIMS in all states: Pralhad joshi