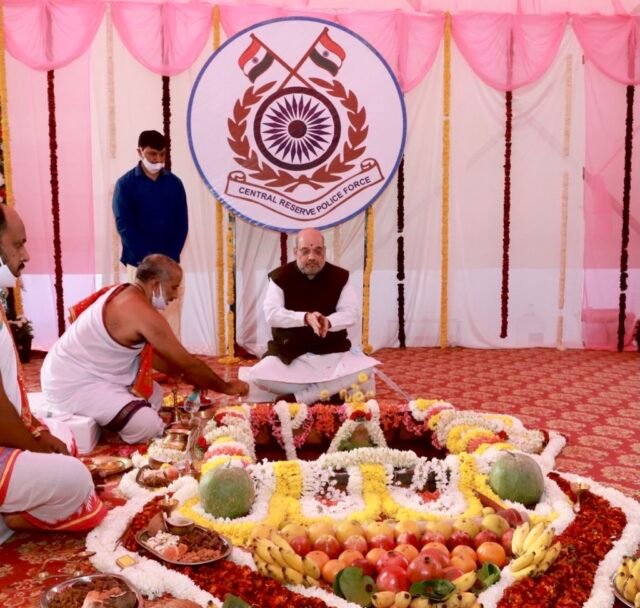 Union Home Minister Amit Shah laid the foundation stone for construction of a new battalion campus of the Rapid Action Force (RAF) near here in Shivamogga district of Karnataka on Saturday.

Speaking on the occasion, Mr Shah said that the country, under the leadership of Prime Minister Narendra Modi, has fought the most successful battle against Coronavirus in the world and with the launch of the vaccination drive today the country has taken the fight against the pandemic to a final stage.

“The whole world, for about a year, has been fighting against Corona, lakhs of people lost their lives in the world. This was probably one of the toughest fights that humanity has fought, using knowledge, innovations and mutual cooperation,” Shah added.

Noting that during the initial days of the Corona outbreak, some experts had expressed worry about a few countries, including India, on how they will manage with a huge population and not so prepared health infrastructure, Shah said there was only one lab in the country that could undertake testing for the infection.

“Today we have more than. The main difference in the fight that India fought against the virus compared to the rest of the world is that the entire population of the country fought it with unity, he said, and claimed that India has less fatality rate and high recovery rate,” he added.

Today with two vaccines produced in the country, we have taken the fight against corona to the final stage,” he said, even as he defended the decision to administer the vaccine to frontline warriors and hit out those spreading misinformation on it.

Mr Shah thanked the Karnataka government for providing 50.29 acre of land for the construction of headquarters of the 97th battalion of the RAF, the blue dungaree wearing special anti-riots wing of the Central Reserve Police Force.

The campus will have a hospital, a Kendriya Vidyalaya, family quarters for troops, administrative building, family welfare centre, sports facilities including a stadium and swimming pool. A total of 1,270 troops of the newly raised 97th RAF battalion, including 106 women personnel, will be based here, officials said.

The battalion will have jurisdiction over a number of districts in Karnataka, Tamil Nadu, Kerala, Goa and Puducherry for deployment by Centre to deal with any communal incidents, protests, riots or events that involve huge congregations.

Shah thanked Yediyurappa for taking the initiative and giving the land for a new battalion campus of RAF that is coming up at a cost of Rs 230 crore. He assured the people of Bhadravathi that the central school and the sports stadium that come up will be designed in such a way that local people can also use the facilities. UNI

‘Covid-19 not as demonic as it seems’