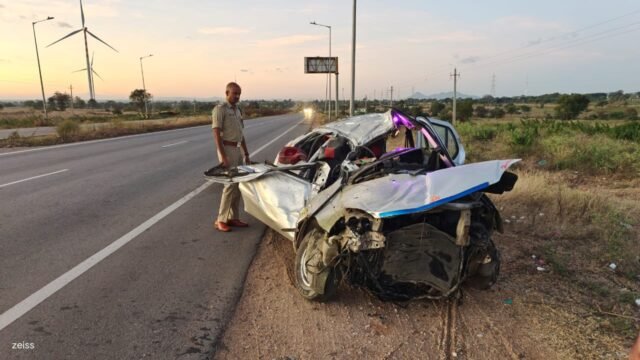 Seven people were killed when the Indica car (KA 51 D 5066) in which they were traveling rammed into a road divider.

Prima Facie it is learnt that the driver would have fallen to sleep at the wheel, near Kaananakatte village in Jagalur taluk of Davangere district on NH-50 in the wee hours of Friday.

The driver Sanjeev, a Uber driver in Bengaluru, had bought the car only recently. The six others were working as daily-wage workers in Reva University in Bengaluru.

The police identified the victims as Mallanagouda (22), Sanjeev (20), Santosh (21), Jai Bhim (18) of Yadgir district, Raghu (23), a resident of Talikoti, Vijayapura district, Siddesh (20) and Vedamurthy (18) of Kudaligi taluk of Vijayanagar district.

Siddesh, who was still alive when the accident took place, died on his way to the hospital.

Sources said that they decided to visit their native places on account of the Sankranti festival after seeing tourist spots in Hosapete and Hampi.

They left Bengaluru on Thursday night by car. Sanjeev, who was driving the car, fell asleep around 3 am and the vehicle rammed into a road divider around 100 meters from the toll plaza.

The bodies were shifted to the taluk general hospital in Jagalur town. The seven youths had moved to Bengaluru to earn their livelihood. With their deaths, their families have lost their breadwinners.

Superintendent of police C B Rishyanth rushed to the spot.